I'm writing a book about learning how to code a web app in Django! Sign up for the interest list at HelloWebApp.com — it should be released around June!

Hi — I'm Tracy. I'm a designer and front-end developer. After being turned down by Y Combinator, I decided to launch a simple webapp to get myself on the path of development.

Say hello to the final product, WeddingInviteLove. It's not too complex, code-wise: I deliberately chose something that would be rather simple to get myself off the ground. This web app was a departure from my earlier project, WeddingType, where I launched my cofounder search on Hacker News in August, found a cofounder, started building the product, applied to Y Combinator for Winter 2011, got an interview, was turned down, and decided to part ways from the cofounder. I'm still planning on launched WeddingType, but if was going to learn how to code, I would have to take baby steps first — thus, WeddingInviteLove.

Working on a different idea, but not pivoting.

If your idea doesn't initially work out, try working on a related project that'll enhance your original idea while keeping your enthusiasm for the area. Both WeddingType and WeddingInviteLove are in the same space — wedding invitations — but catering to two different types of customers. WeddingType, the invitation typography generator, is for non-designer couples looking for a save some money by creating their own invitations. WeddingInviteLove is a directory of boutique wedding invitation designers, for couples who are looking to spend more for a professional and higher quality. They both increase my prominence and reach within the wedding invitation industry, but also avoid poaching customers from eachother.

Why did I choose Python and Django over Ruby or any other programming language? I needed to take advantage of the resources I had, mainly, @shazow, my bf who's an expert in Python but specializes in Pylons, a different framework. I've heard a lot of quality discussions between Pylons and Django, but for me, Django has a lot more hand-holding than other frameworks and a lot of tutorials online. For nitty-gritty Django questions that Andrey couldn't answer, I tweeted that I needed some help and got two awesome advisors, @kantrn, who I met in person several times to work out problems I was having, and @kennethlove, who I'd IM at all points in the night for help with specific bugs. I also used @kennethlove's screencast blog tutorial, since I could relate it directly to my project — profiles on WeddingInviteLove are like blog posts on a blog, I just simply changed some names around. All code was written by myself while taking advantage of the numerous Django applications such as django-registration.

Build the web app first, then design it.

It was tempting to build the entire interface first but I deliberately ignored the design until I had things 90% working. This got me to constantly work on the code before working on the "fun stuff", plus encouraged me to launch quickly since as soon as the code was finished, all I had to do was quickly "skin" it before getting it live with the assumption that I would be iterating on the design after it launches. Also, if I needed to abandon the project due to some insurmountable code problem, the time wasted wouldn't include the time spent on design.

Launch as fast as possible.

Nothing kills a new idea better than taking too much time on it. There are thousands of things more that I could have done to improve WeddingInviteLove before I launched it, but getting it out and generating feedback was much, much more important. I don't mean you should launch an incomplete project, but pare down your features to the very minimum and get it live as fast as possible. 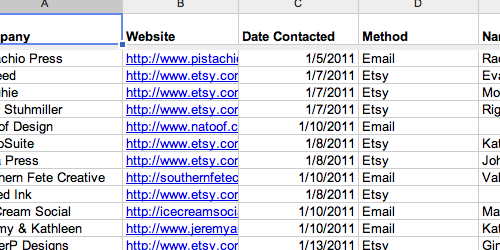 One problem I faced was convincing designers to sign up before the site was live, so I created three fake profiles and emailed 10+ designers with screenshots of the homepage and future profile pages, explaining that I was building it for fun and it would be free to list them. It's a win-win scenario for the designers and myself, but emailing out of the blue can look shady. One designer replied that my email looked like spam, but the professional design in the screenshot I linked convinced her to sign up anyways. My design meant the difference between someone ignoring my email versus taking it more seriously.

Once the website received its first 3 profiles, I got it live (on Dotcloud), but continued to email designers directly, now pointing to the live site. Overall, I emailed 67 designers directly (see screenshot), with an approximate 50% response rate and slightly less sign-up rate.

I was up to about 20 designers (not that big of a deal to any potential customer looking for a full fledged directory), when I traveled to New York and decided to chat up one of my favorite design bloggers, Tina Roth Eisenberg (Swiss Miss). The tactic of traveling and emailing someone "famous" randomly in that area and inviting them to lunch has worked well in the past (I landed a guest spot on The Big Web Show after inviting Jeffery Zeldman for lunch). After the lunch I was able to show her WeddingInviteLove and got some great feedback, all I was expecting and hoping from the visit. Awesomely, after I left, WeddingInviteLove was blogged about on Swiss Miss. Getting profiled on one of the best design blogs out there was the best beginner boost that I could ask for, launching a trend of blog posts and tweets, and landing WeddingInviteLove another 60 designers to a total of 83, a week after the Swiss Miss blog post.

I get asked a lot on how I'll monetize. I have no intention of ever taking away free profiles, charging customers to search, or acting as a middleman and taking commission. My current plan is to launch pro profiles, with support for more portfolio images and other features for every upgraded profile. Before I can launch this, however, I have to get more links and traffic to ensure a pro profile is "worth it" to designers, so I've been focusing on promotion for the last few weeks.

I'm writing a book about learning how to code a web app in Django! Sign up for the interest list at HelloWebApp.com — it should be released around June!